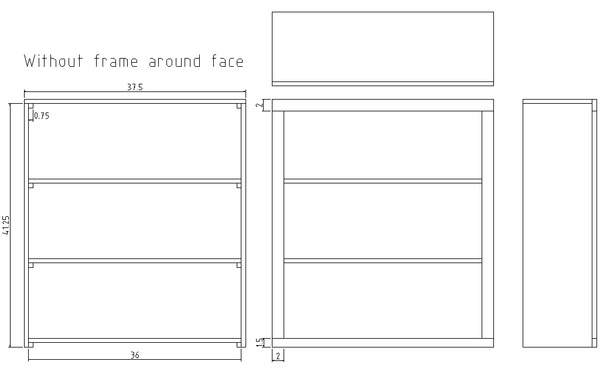 This is a simple bookshelf of all straight cuts. The CAD layout is slightly different than the pictures because after assembling the plans I originally drew up, I decided I didn't like how the top came out and modified it so that the top is 1 continuous board and does not show end grain.

I used pine boards, which come in 1 inch thick by 12 inch wide boards of various lengths. These boards are planed which makes them 3/4 by 11 3/4 instead, which worked out well since that makes all the cuts according to this plan just quick rips of the boards, except the face pieces.

If I were to do another book case I'd probably get rid of the 3/4x11 3/4x3/4 peices and use a dado instead for the shelves, since it would have been stronger and also looked nicer and not required the face pieces. I didn't have a router at the time though so that would have been tough. You learn as you go I guess.

There isn't much to comment on in the construction other than the basics, like use a framing square to be sure the top and bottom are square, and the top level. Then put in the shelves since you know it should be straight.

Since this was one of my starting projects I learned a lot, but luckily it came out ok. However after it was done I immediately saw lots of things I could have done better. I guess that's how it goes though.