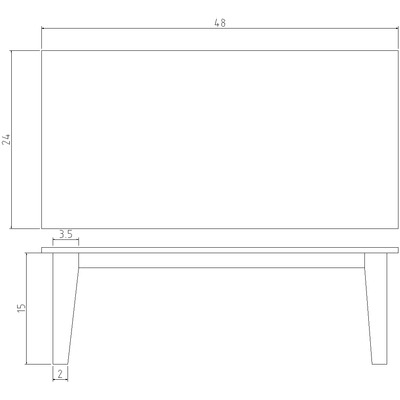 First I glued up 2 of the 4 foot boards to make the top. I had never glued anything up like this before so I clamped the best I could, but it turns out I need more clamps. The top looks ok, but near the middle you can see a bit of a seam, where I didn't have another wide enough clamp to pull the joint tight.

After that I ripped 3 2" wide strips, and cross cut one to the length I needed for the short sides of the table. I was surprised that I had cut better this time, since when I did the book case the rips were pretty bad. I didn't have to plane much at all though to get the rips straight this time, so maybe I'm getting a bit better. One can hope anyway.

The width of the top of the legs was determined by dividing the width of a board in to 3, and subtracting 1/8th of an inch from that to compensate for the kerf. I was surprised that this worked out pretty well, I assumed I would be shaving a tiny amount off the last piece to get it the same width, but it turned out I didn't need to. Apparently I get lucky sometimes.

After this I used my router table to cut a rabbet in the sides of one of each of the leg boards. This made a better joint than using a butt joint, and also made the widths of the legs in each direction about the same. Also, this allowed me to use a roundover bit on the corner to make the seam mostly invisible. I did this because my attempts at making a miter cut that long all failed pretty spectacularly, and I figured it was best to not even waste my time when this was so much easier and also looked ok. Originally I wanted to glue-up 3 boards for each leg, but after some experimenting I found that my table saw didn't have the power to cut something that thick without burning it. So I was left with an L shaped leg and had to do my best to make it look decent.

After the legs were assembled I then glued up the skirt area, using all butt joints. I also used a web clamp, and a 2x4 covered in tape in the corner to square it up while it dried. After that dried, I then glued the legs to each of the corners.

Now that the frame was all assembled, all that was left to do was sand everything, finish the top, and fasten it to the frame.

To finish the top, I routered the edge using a roman ogee bit. I had used a roundover bit on all the legs so I wanted something a little different on top, and my cheap router bit kit only had stright, roman ogee, and roundover bits. So I didn't have much choice at this point. Still it looked pretty good, or at least good enough for me.

I applied a natural stain finish, then polyurethane. I did 3 coats on the legs and 4 coats on the top. This made everything nice and shiny.

Now I just needed to attach the top to the frame. Originally I wanted to use the fasteners shaped like eights. After going to several stores and looking through the catalog where I worked, I learned this was not something that was easy to track down. So I broke down and decided to use 3/4x3/4x4 blocks that I drilled and screwed in to the sides and the bottom of the top. This fastened te top well, but I am afraid the movement of the wood will tear the table apart at some point in the future. When that happens I'll put a note here, so if you don't see a note yet, that means the table has been ok since the date listed in the project info.

Overall it was a fairly easy project and I learned a lot. Now it seems I've been tasked with making matching end tables... So more plans to come.

This was the first time I had to do any kind of panel glue-up. This turned out to be a very informative process, and even though it wasn't perfect I was ok with the results. However in the future I'd hope to do a better job.